Recently, I have been reflecting on the state of health and social science in the US.

How competitive is it to get an NIH grant?

The number of submissions to the National Institutes of Health has grown continually over the past 20+ years; in 2018, NIH received more than 55,000 grant applications, of which about 20% were funded, though the success rate varies by NIH institute. 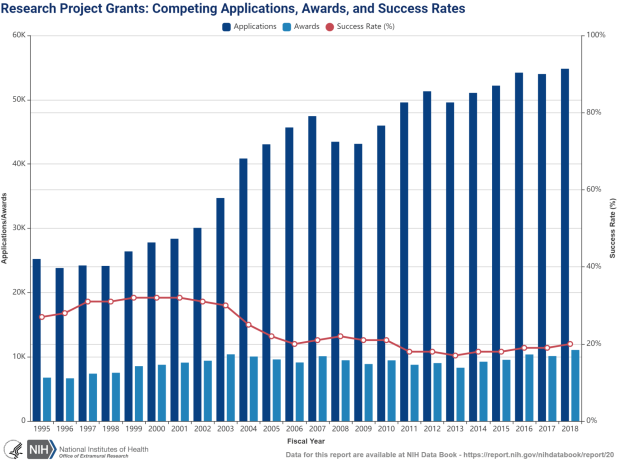 Who is actually receiving grants?

NIH’s Data Book makes it easy to see the breakdown of grant awardees by gender.

Thus, about 70% of R01-equivalent (NIH’s main grant mechanism for large research projects) are awarded to men. I tried to find the numbers broken down by race/ethnicity in NIH’s Data Book, but the numbers were not available. Nikaj, Roychowdhury, Lund, Matthews, and Pearson (2018) examined R01 grant awards between 2009 and 2016. They found that less than 5% of awardees identified as underrepresented race or ethnic minorities.

Thus, the majority of NIH-funded biomedical, health, and social science research grants are awarded to men who are non-underrepresented; or primarily white men. That is, the nation’s NIH funded research agenda is being primarily driven by white men.

Why does the lack of diversity matter?

The NIH lists one of it’s fundamental goals as “to foster fundamental creative discoveries, innovative research strategies, and their applications as a basis for ultimately protecting and improving health.” Unfortunately, the lack of diversity in the NIH-funded workforce may be stifling innovation and creative discovery, and ultimately protecting and improving health for some not all. Galinsky et al. (2015) argued that diverse groups “enable effective decision making, innovation, and economic growth by promoting deeper information processing and complex thinking.” That is, groups that are less diverse, will have less innovation at least partially due to more simplistic thinking, and will actually solve problems more slowly and are less productive. Because NIH-funded research groups are often not diverse and are most often led by men who may not have had to face gender, race, or sexual minority discrimination, there are likely numerous critical, fundamental research questions that are not being answered because well-resourced groups with the ability to carry them out are not thinking of them. These critical, fundamental research questions may be asked by diverse scholars, but due to a lack of data, these scholars may never have the resources to answer these questions. Ameliorating health disparities (due to gender, race, ethnicity, education, social class, sexual and gender minority status, and other factors) is one of our most pressing public health problems. Efforts to reduce and eliminate health disparities should be led by diverse teams of researchers who are designing cutting edge studies to ask questions that are not currently being asked, and to collect data that are not currently being collected to answer them.

Health and Social Science for All: The Case of the National Couples’ Health and Time Study

I am leading a team that is working on the National Couples’ Health and Time Study (NCHAT). NCHAT is the first population-representative study of same and different-gender couples in the United States. We are collecting data from over 2500 individuals and their partners, and will have an oversample of individuals who are race and ethnic minorities. With support from NICHD, we will be collecting survey, time diary, and biological (dried blood spot) data. These data will eventually become available to scholars around the world to use, in the same vein as studies like the National Longitudinal Study of Adolescent to Adult Health or the Fragile Families and Child Wellbeing Study.

The research team for NCHAT is diverse in terms of race, ethnic, and sexual minority status. In fact, it is the most diverse team I have worked on, by design. Having this diverse team has shaped the project in critical ways that will certainly increase its impact. For example, one day when we were going over the survey, a team member points out that we had items and language that could be interpreted as a microaggression to some groups. As a white, cis, hetero woman, I did not notice these microaggressions, and now our survey is less offensive thanks to our awesome team. Yay! There are also items, questionnaires, and research questions that our team has discussed that I never would have thought about on my own. I am so grateful for each person’s perspective: JaNelle Ricks, Wendy Manning, Miranda Berrigan, Alexandra VanBergen, Patricia Pittman, Lawrence Stacey, Luther Young, Meghna Mahambrey, Jessica Horan, and Corinne Reczek.

Our goal in survey design has been to design a survey that will not only allow us to test the aims of our grant, but will also give researchers without access to adequate populations to test their research questions the ability to do so. With that in mind, we are crowd-sourcing our survey. That is, we want feedback from all scholars who might be interested in using these data to answer important research or policy-related questions. You can find a draft of the survey here, and you can find the feedback form here. The feedback form will stay open until June 16, 2019. We are grateful to have already received feedback from several individuals that has been incredibly helpful. Thank you all.

This is my stance on open science, and health and social science for all. I cannot wait to see how NCHAT will advance my own science, and perhaps even more importantly, the science of diverse scholars around the world. Help us make sure it does by giving us your feedback and shaping what we learn.

I am a family scholar, relationship scientist, and demographer. I do not identify with a single social science discipline. Rather, I use multiple disciplinary approaches in my research, from social psychology to family sociology, from economics to lifespan human development. I am passionate about interdisciplinary family research and my own family. I blog at Adventures in HDFS and am available for academic writing coaching and retreats through Cultivating Writing. View more posts